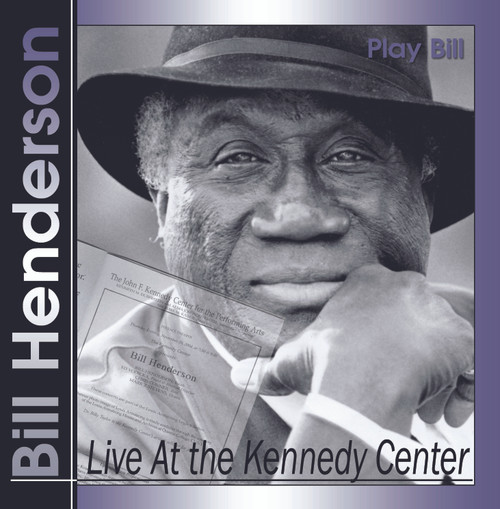 BILL HENDERSON LIVE AT THE KENNEDY CENTER is Henderson’s first solo release in over 20 years. And to celebrate his 80th birthday year, Henderson truly delivered in this special live recording from The Terrace Theater at the Kennedy Center. Backed by the Ed Vodicka Trio in 2004, Henderson entertained and treated his SRO crowds to one of his greatest musical performances, a first class tour of the American songbook. He wows his audience with the pure resonance of his voice and his familiar stylings of such signature songs as “I Thought About You,” “My Ship,” “That Old Black Magic,” and Billy Strayhorn’s “My Little Brown Book,” and “A Flower is a Lovesome Thing,” among others.

Also known to film and television audiences worldwide, Henderson has appeared in featured roles in City Slickers, Lethal Weapon 4, ER, and Cold Case, among many others.

Legendary jazz vocalist Bill Henderson is accompanied by the Ed Vodicka Trio, offering up gems from the American Songbook.  Bill's career has spanned over 50 years, recording seminal works with Horace Silver in the 1950's (Senor Blues), his original solo releases on the VeeJay label, a landmark album with the great Oscar Peterson Trio, and several sides as well as touring years with the one-and-only Count Basie and his orchestra.   Hollywood called Bill and beginning in the 1970's, and with the help of his friend and mentor Bill Cosby began a television and film acting career including roles in The Twilight Zone, Happy Days, Sanford and Son, Harry-O, Good Times, Diff'rent Strokes, Hart to Hart, The Incredible Hulk, Hill Street Blues, NYPD Blue, ER, Cold Case, and major films include City Slickers and Lethal Weapon 4.

"Live at the Kennedy Center" was released in honor of Bill Henderson's 80th Birthday in March of 2006, and within two weeks placed on the national jazz radio charts.  This release brings the live concert experience to your player-piano and living room --it is truly a memorable recording not to be missed!